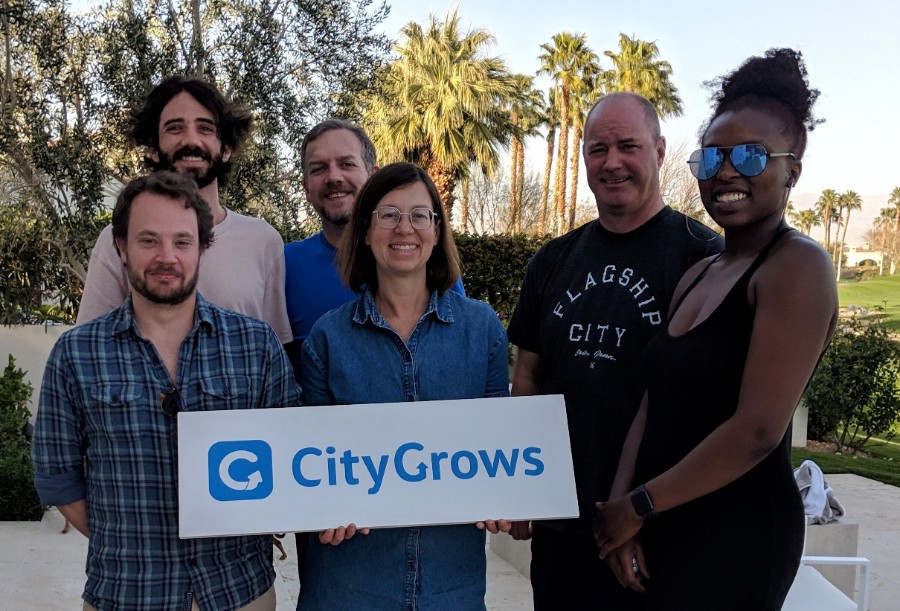 In late 2015, our Chief Technology Officer and Founder Stephen Corwin was frustrated with the lack of machine-readable open data about real estate development permits in Los Angeles. Even when data was available, it was in PDF format or required looking up records by parcel number, and the quality of the data was spotty at best. As a side project to his civic technology consulting firm, he built a complex web scraper to extract, match up, and visualize the data. It worked, but he soon realized this wasn’t a scalable solution to a problem most cities had. He understood that unless governments collect data in a standardized, validated, and consistent way, it would always be difficult to provide real-time status updates and transparency. He started working on an early version of the CityGrows platform in order to help governments better collect information online. Like some of our competitors, he started with forms. Luckily, he didn’t stop there.

Stephen entered the early version of CityGrows into the City of Santa Monica’s Hack the Beach technology challenge. The City wanted to engage with the ‘Silicon Beach’ tech community and create improved quality of life for its residents. As one of 10 finalists, Stephen worked closely Jack Moreau, a Transportation Management Specialist in the City’s Mobility Division over the course of 6 months. Jack manages complex business-facing processes, like the City’s Emissions Reduction and Worksite Transportation Plans, which require employers to report on and reduce single-car commute trips, and he and his manager were determined to automate more of their work.

His IT department had told him it would take more than $200,000 to build out a digital version of his workflow, but he knew there had to be a better way. Jack’s real-world use case made Stephen realize that data collection was only part of what governments, and began to expand CityGrows into a full-featured process management and workflow tool.

By working closely with Jack and other City staff, Stephen learned what local government staff and managers needed from workflow technology, and got a sense of the complexity of their workflows. Through field-testing our Santa Monica prototypes with friends and colleagues at the City of LA and other local governments, he learned that even though the functions of local government are fairly standardized (in most jurisdictions, dogs get licensed and building permits issued) the implementations are fairly unique.

He saw department managers’ frustrations: they’re often unable to rely on overburdened IT departments, and overwhelmed by the hurdles required to procure and pay for technology. He got a sense of the hundreds of unique processes within each government, in all their beautiful complexity.

The only scalable solution was to make CityGrows a self-service platform, one that would allow any government employee, no matter how technically skilled or unskilled, to configure and manage their own workflows. So instead of building a standalone product that worked just for Jack’s process, we built a platform so Jack could configure his own processes.

An early version of CityGrows — how Santa Monica’s WTP appeared in mid-2016.

Once the process was implemented, Jack realized that there were additional things he could improve. As agile software developers, we knew that iteration and continual improvement would be beneficial to government, so we adapted our platform to make it easy for Jack to edit workflows once they’d been implemented.

The most consistent feedback we received from constituents was the request to include the option to pay the WTP fee online, so we configured and launched payment processing capacity. Through working with our City partners, we started adapting CityGrows to reflect the technology needs we heard about from our friends and customers in local government. We created a platform that lets government employees ‘mix and match’ the core functions of government:

One of the admin view of CityGrows — what you see when you select which type of step will go next on a process template.

Most functions of government are made up of these steps, yet each government arranges them in their own order, collects slightly different information, and has different requirements of its constituents and its staff. At CityGrows, we realized that we could plan for the different functions of government, but we could never accurately anticipate how they would be combined by different departments, for different processes, and in different places. Our platform lets the people who really know how government processes work (and how they could be improved) administer the digital versions of those processes. We’re confident that we’ve built the only platform that’s truly designed to facilitate getting almost any government form online, while also bringing ownership and digital confidence to the public employees who are involved in these processes.

Not long after Santa Monica launched the first version of their online Worksite Transportation Plan, Catherine Geanuracos joined the CityGrows team to help Stephen build a company around the technology platform he’d created. We quickly saw many different types of governments begin using the platform, from the City of Los Angeles to Inyo County to Chelsea, Massachusetts, and we’ve continued to expand the types of governments and workflows on our platform.

Here’s what the Santa Monica’s Worksite Transportation Plan looks like on the current version of CityGrows.

CityGrows is built for accessibility and to encourage increase usage. There’s no structural or financial limitations on the number of processes that can be created on our system or the number of administrative or constituent users. CityGrows is designed to be scalable and to support as many government use cases as possible. We want to incentivize more people in each organization to use the platform, rather than penalize governments for adding additional admin users.

Through our user research with government staffers at all levels, we created a business model that aligns our company’s interests with that of our users and their constituents. When governments increase compliance and revenue, everyone benefits. When we improve efficiency and allow public sector staff to devote their time to constituent services (instead of data entry), workflows are completed more quickly and constituents report higher levels of satisfaction. Our status as a startup gives us control over the pricing, policies, and growth of our business. Because we are a small team that has built a robust technology platform, we are able to provide exceptional value for our government clients. We offer a range of plans and pricing options, built around our core revenue source: payment processing fees. We have a commitment to making our technology low or no-cost and therefore, accessible to any size government.

We’re steadily expanding our work with different types of governments: countries, states, counties, and municipalities across the country. We’re also seeing more and more governments starting to clone each other’s workflows and adapt them for their own use. This encourages collaboration, data standards, and regional consistency in the ways processes happen. We’ve built CityGrows by listening to and incorporating feedback from our local government users and their constituents. We hope you test out CityGrows for yourself, and let us know what you think of it!